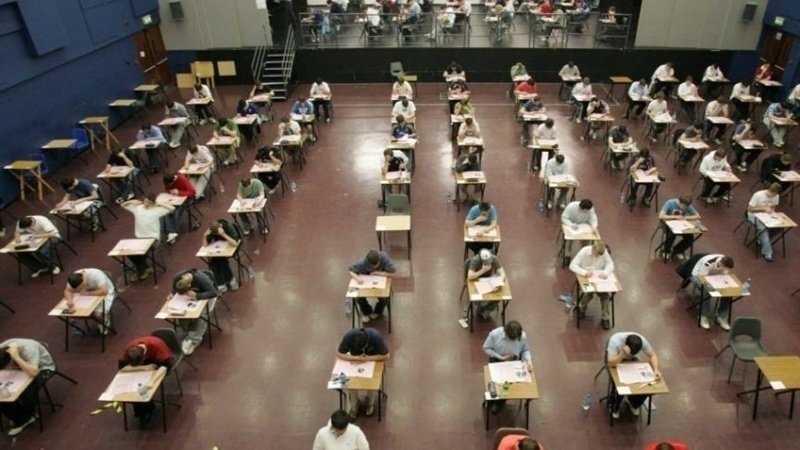 Teachers concerned about health implications if Leaving Cert goes ahead

The Teachers’ unions have voiced concerns with Department of Education officials about the health implications for members if the Leaving Cert goes ahead later this summer.

Among the concerns relate to the safety thresholds for numbers that will be allowed in classrooms and exam halls, according to sources.

The executive committees of the Association of Secondary Teachers, Ireland (ASTI) and the Teachers’ Union of Ireland (TUI) both met on Wednesday night to discuss these issues and what role their members may play in grading Leaving Cert students if the exams are cancelled.

It followed a meeting attended by Minister for Education Joe McHugh on Wednesday, during which a number of alternatives to the written exams were discussed, including predicted or expected grades. This is an option that is being implemented by other countries across the World in light of the current health risks.

Well-placed sources said at last night’s meetings there was a recognition among Teachers that an urgent alternative to the Leaving Cert is required and members need to be seen to support students.

The views of both unions will be crucial is determining what viable alternative assessment options can be put forward.

The development comes as a new survey shows an overwhelming majority of Leaving Cert students want the exams to be cancelled and replaced with estimated grades. Also, over 26,000 people have voted for the Cancellation of the Leaving Cert 2020 and in its place a system whereby college will look at past results from 5th and 6th year, obtain references from teachers detailing the results that they feel the student would have been capable of receiving.

Finally an interview process conducted by the relevant faculties depending on the students chosen course.

In the Dail Debates today;

Taoiseach Leo Varadkar has said that if the Leaving Cert exams are cancelled "we have to make sure that we put in place an alternative".

Speaking in the Dáil, he said is was "extremely difficult" to come up with an alternative that would be fair.

He said this was "the kind of work that is being done now at the moment involving the unions [and other parties] and that is going to be difficult".

He has said the issue of the Leaving Cert is one that the Government wants to bring to a conclusion this week.

He said that while it was possible to hold the exam within public health guidelines, it would not be the Leaving Cert "as we know it".

Responding to questions from Solidarity/People Before Profit's Mick Barry, he said he totally appreciated that the uncertainty was causing enormous stress.

Mr Barry said that in 20 years as a public representative he had never before seen a Government decision cause so much mental anguish to young people.

He said a survey of students found four out of five did not want the exams to go ahead.

He told the Dáil they felt they were being forced to do exams against their will.

He said he had held an online meeting last night with 2,500 Leaving Cert students and he asked for a committment to cancelling the exams.

It comes as discussions on reaching a definitive decision as to whether or not to hold exams for this year's Leaving Certificate students continue today after teacher representatives were briefed at trade union meetings last night.

ASTI and TUI executive committee members discussed other mechanisms for measuring student attainment, such as predicted grading and school profiling.

Union reps were briefed on grave problems that the State Examinations Commission has identified with holding the exams, including the difficulty of maintaining social distance between students.

Teachers discussed the feasibility of using existing data, such as school track records to arrive at alternative ways of assessing students.

They also discussed the feasibility of awarding predicted grades.

Discussions between the Department and education partners will continue.

Ultimately though this is a decision for government and a decision is expected soon.

Minister for Education Joe McHugh and officials from his department met student, teacher, parent and other education representatives yesterday.

It is understood discussion at the meeting centred on a range of options, including holding the exams starting on 29 July, which is the current plan.

The meeting also discussed other models of assessment, including predicted grades.

In a statement issued after the meeting, Mr McHugh thanked participants "for their ongoing engagement and support".

He said the discussions would "assist in making decisions regarding arrangements for the Leaving Certificate that have students' best interests at heart and that are guided at all times by the public health advice".