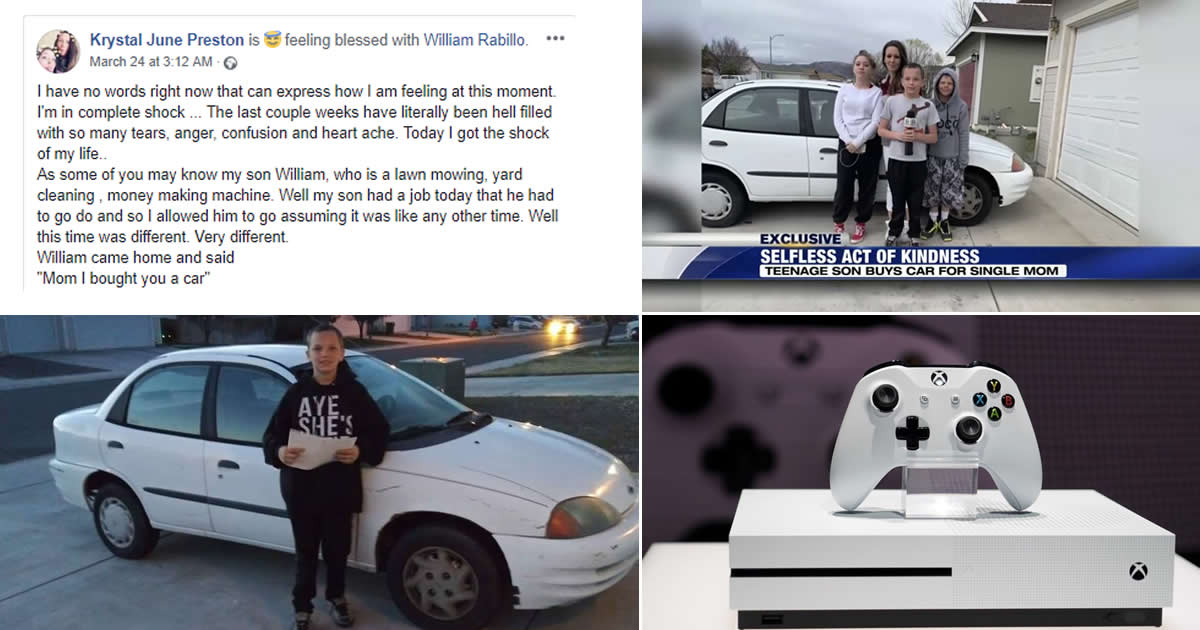 13-year-old boy sells Xbox, does yard work to buy his mother a car

A single mom from Nevada, USA said she was in "complete shock" after her 13-year-old son gave her a grand gift she never expected from a boy his age. Krystal Preston posted the heartwarming story on her Facebook, sharing that her son, William Rabillo, surprised her with a car.

"I have no words right now that can express how I am feeling at this moment," the mom wrote. "The last couple weeks have literally been hell filled with so many tears, anger, confusion and heart ache. Today I got the shock of my life."

Preston said her son, who had been busy mowing lawns and cleaning yards, turned into a "money making machine" recently. That's why she didn't question the teen when he said he had a job to go do. When he came back home, Preston realized this time was different.

"William came home and said, 'Mom I bought you a car,'" Preston wrote. "I of course laughed and told him, 'Ya right!'"

Rabillo told his mom he was serious — he really bought her a car. He told her they had to go see it "with this lady." The few details coming out of her son made Preston skeptical, but when she walked outside, there was a woman in their front yard waiting to give them a ride.

Rabillo jumped in the woman's car and his mom, still puzzled, followed along. "I'm still thinking at this point [it's] still a joke. We pull up to this house and William says, 'Mom that's your car.'"

"I completely lost it," Preston wrote, adding that she started to cry. "I am speechless my 13 year old son bought me a car."

In an interview with KOLO-TV, Rabillo said the idea came about when he was scrolling through Facebook and found someone in his area was selling a car. He reached out and offered to give them his Xbox and do some yard work in exchange for the car. The seller took him up on his offer.

"And here I thought it was a joke," the mom wrote. "Nope I was handed the keys and paperwork to the car and I'm freaking out but so in shock."

The mother and son drove off together in the white 1999 Chevrolet Metro he bought her.

"I am so proud of my son. He is such a good kid," Preston wrote. "He may have his days but OMG what 13 year old kid do you know that buys his mom a car... William I love you son and thank you. You have such a big heart and I love you ..."