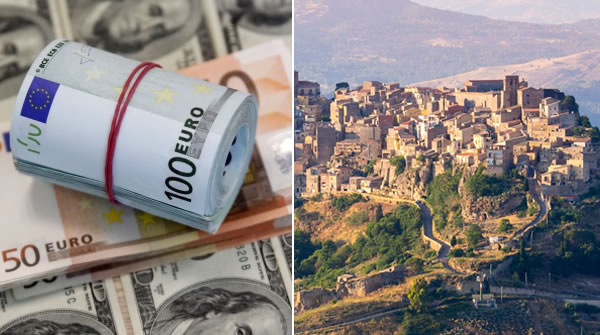 8 Places that will pay you to live there

Getting paid to move might sound too good to be true. But there is a growing list of cities, states and even countries angling to do just that.

Located in the heart of Sardinia, with a population of about 1,500, picturesque Ollolai is suffering from the same fate as many Irish rural villages; depopulation.

But, in an effort to staunch the flow of residents moving closer to jobs in cities and towns across the country, it launched a scheme in 2018 to attract new blood to the village.

“Case a 1 euro”, or “houses for €1” is a scheme aimed at luring new residents, which allows them to buy a house for the princely sum of just €1. There is a catch, of course – the owners will have to foot the cost of renovation. It has been estimated that it would cost at least €25,000 to renovate a typical property, and you’re required to do this within three years of your move.

Unsurprisingly, the village’s scheme has attracted a lot of interest. According to Magaraggia, a law firm that advises people on how to buy, sell, and manage properties in Italy, Ollolai received 5,000 requests for its first 100 properties, while recent reports suggest that so far several dozen houses have already been sold for refurbishment.

But if you can’t find an available property in Ollolai don’t despair; the “case a 1 euro” scheme is also in operation in other parts of Italy, including Sambuca in Sicily, and Zungoli, near the Amalfi coast. You can find more information on what’s available here: www.1eurohouses.com

Also in Italy is Candela, a small town in Puglia, located in the “heel” of the country, and a short drive from the region’s beaches. Since launching its incentive scheme to attract new residents back in 2017, it has welcomed 12 new inhabitants of “all ages, nationalities and professions”.

The town, which was known as “Nap’licchie” or “little Naples” because it was so busy, now has a population of just 2,700, and so decided to offer incentives to attract new life.

It offers cash on a sliding scale to people willing to move there, ranging from more than €2,000 for families of four or five people; €1,200 for couples; and €800 for singles, as well as tax credits on expenses such as waste charges.

To qualify, you must live in the village, rent a property there, and have a salary of at least €7,500 a year. You can expect to pay less than €400 a month in rent for a four-room property in the region.

Vermont, USA: If accepted for the Remote Worker Grant Programme, you’ll get a grant of $5,000 a year over two years, to cover moving, living and working expenses, including relocation, computer software and hardware, broadband internet and access to a co-working space

You will need permission to work in the US to avail of this programme, but if you have or can get this, it’s an attractive offering.

To combat an ageing population, with about one-third of the state’s households consisting of someone aged 65 or older – and therefore try to ease the heftier tax burden in the state by sharing it among more workers – Vermont now offers a series of incentives to new residents.

Yes, last year, Vermont governor Phil Scott launched an initiative offering $10,000 to people if they would move to the state. If accepted for the Remote Worker Grant Programme, you’ll get a grant of $5,000 a year over two years, to cover moving, living and working expenses, including relocation, computer software and hardware, broadband internet and access to a co-working space.

Up and running since January 1st, the operators of the scheme say it operates on a first come first served basis. But there is a catch; you’ll need to work for a company outside of the state – hence the “remote” in the programme title – to qualify for the grant. As of end-July of this year, about 56 grants had been approved for the programme, with an average applicant age of 38.

However, if this isn’t suitable, then the state is set to launch a new scheme in January 2020. Under the New Worker Grants Program, you could qualify for assistance of up to $7,500 if you move to Vermont to work full-time for a local employer.

Located on the edge of the Aegean Sea, between Crete and the Peloponnese, this idyllic Greek island could become your home.

At just 20 square kilometres (think Inis Mór, which is 31 sq km) this island is home to about 24 people today, but is desperately looking for new inhabitants.

It has launched a repopulation campaign to find new people – ideally families – to come and live there. While priority will be given to Greeks, it is also open to foreigners, and offers a monthly cheque of €500 for the first three years of residence, to those chosen for the scheme. In addition, the chosen few will also be offered a house, as well as some land, to start farming on.

But a move to the island may be best suited to those at home with island life; with just one shop, no ATM, and a two-hour ferry trip to the nearest “metropolis” of Crete, it’s not for those who crave the hoi polloi.

It’s not quite the same thing as being paid to move somewhere, but if you opt to set up home in Alaska, the US’s most northerly state, then you will soon find yourself eligible to get money from the government.

Yes, after just one entire calendar year as a resident of the state, you will find yourself eligible for the Permanent Fund dividend, which was set up back in 1976 to reward residents with proceeds from the state’s lucrative oil and gas industry.

And it’s not insignificant; last year for example, residents received $1,600 out of a $1 billion fund just for living there. The dividend peaked in 2000, at almost $2,000, but this year the legislature voted to take a portion of the fund to pay for state services.

Just like villages and small towns right across Europe – just like our own Arranmore, which is hoping to attract new residents by pitching itself as a digital hub – Spain’s Ponga, a tiny village in Asturias, is suffering from de-population.

With less than 800 people now living in this northwestern village, with Oviedo one of the nearest big towns, this village is paying people to move there.

It is offering young couples €3,000 to move there – and you’ll get an extra €3,000 for every child you have while you’re there. You will need to commit to staying in the village for five years however, but can expect a cheap standard of living once there.

According to Numbeo for example, a three-course meal for two people in Oviedo would set you back just €35, while a cappuccino costs just €1.39 and you’d pay just €460 a month for a three-bed apartment outside the centre.

Looking for a new summer home for just one Swiss franc? Well, look no further than the Swiss mountain village of Monti Sciaga, which just this summer launched the sale of nine stone properties, known as rustici, for €0.91.

The pretty village is Italian speaking, in the canton of Tessin, with views of Lake Maggiore, and is just 70 miles from Milan (handy for flying in and out of).

Like other such schemes, purchasers of the properties will have to undertake a renovation of them, in accordance with conservation guidelines.

But the scheme hasn’t yet been given the green light – the local council is expected to sign off on the proposal this autumn.

Yes, it is a bit of a move, but if you’re a female entrepreneur looking for something a bit different, it might appeal. It could also pay off financially.

Every year, Start-Up Chile runs an accelerator event aimed at attracting female entrepreneurs to the country by offering them $25,000 (€22,400) equity free funding, as well as other perks, which include a year-long work visa as well as a complimentary co-working space.

The most recent round of funding attracted entrepreneurs from 12 countries around the world, and the next application process starts on December 3rd, 2019.