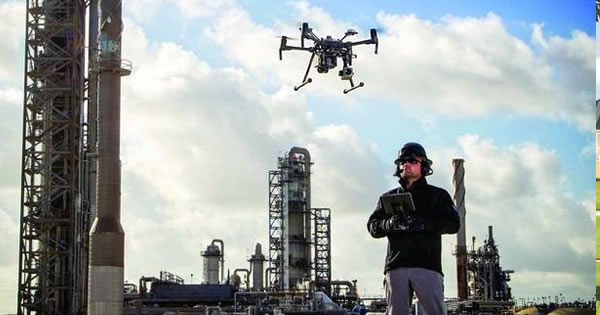 Here's a job any worker would be happy to pass off to a drone: imagine crawling down a ladder into the vast darkness of a 20-storey-high storage tank filled with toxic chemical fumes to spend hours searching for corrosion.

More than a thousand US labourers have been killed working in confined spaces like that in the past decade.

One of them was 43-year-old Clinton Miller, an AkzoNobel employee who passed out after entering a tank to retrieve a piece of rubbish at a North Carolina chemical plant last year.

Oxygen levels were found to be just 11pc inside the structure, according to a federal incident report. Enter the ever-more capable drone.

Big industrial companies including Dow, AT&T, BASF and Royal Dutch Shell have begun assembling fleets of the flying automatons to take over their most dangerous jobs.

Ascending several hundred feet in the air to inspect tanks and towers, squeezing through claustrophobic tunnels to replace a faulty part, or peering into the maw of a flame-belching smokestack - all are jobs that robots are being designed to do, companies say.

"We look at these tasks and say, 'Is there a better way that we can do this without exposing the worker to risk?'" said Chris Witte, manager of chemical giant BASF's Freeport, Texas, site. "The answer is yes. We can send a drone in."

Drones now fly every day at the Freeport plant, keeping workers off scaffolding and out of tanks. For all the talk of automation and robotics replacing human labour, the new uses of drones show how technology can cut costs for companies while dramatically reducing risk, and even saving lives. They also show why businesses are pressing hard in Washington for the ability to use drones in more situations.

Inspections of gas flares at Shell's refineries used to take days, said Randy Burow, Shell's health and safety manager. To get workers close enough to the flame-spewing stacks to check the pilot light, the system had to be taken offline, then workers were hoisted in a basket several hundred feet high to the top of the stack. Now drones can complete the inspection of still-burning flares in a few hours without a worker ever leaving the ground.

In 2017, 166 US workers died in confined spaces. But that number pales when compared with the 887 killed by falls, the second-biggest cause of workplace deaths after car accidents, according to Bureau of Labour Statistics data.

AT&T has invested in a large fleet of drones to help inspect its 65,000 phone towers in the US, which can rise as high as 1,000 feet. Working on them is especially perilous: tower climbers fall to their death at nearly 10 times the rate of construction workers. The telecom giant has used drones to eliminate 5,000 tower climbs in the past 18 months, said Art Pregler, the director of AT&T's drone programme.

With high-powered cameras attached, increasingly agile drones can soar to the top of a tower in minutes, float among the steel frames and zoom in for close-up inspections. Drones send images so detailed that workers on the ground can count the threads on a bolt, said Pat Dempsey, who oversees telecommunications maintenance at power utility PSEG.

"The fact you don't have to make a person climb that tower, from a safety standpoint, it's a game changer."

Even with precautions including safety gear, air monitoring and rescue workers on standby, things can still go wrong with so-called confined-space entries by people.

The scale of some of the tanks is massive, comparable to a two-inch-tall person crawling into a household water heater unit, said Billy Bardin, Dow's global technology director.

Dow, one of the world's largest chemical makers, said it used robots for more than 1,000 confined-space entries in 2018, and for another 1,000 external inspections that involved high elevations, significantly cutting down on the risks to its workers. "That kind of entry is one of the most potentially hazardous activities that we do," said Mr Bardin.

The company's goal is to reduce the number of human entries into such confined spaces to zero by 2025. That would require developing drones that can conduct repairs and other tasks, rather than just broadcast video, according to Mr Bardin.

Technology is speeding in that direction. The average commercial drone costs about $25,000 (€22,400), but the price can rise as high as $250,000, said Chuck Dorgan, sales director at German manufacturer Microdrones.

"I get asked by companies almost every week if we can do something that I've never thought of doing with a drone," said Ed Hine, vice-president for operations at PrecisionHawk, another drone company.

Apellix, a commercial drone startup in Jacksonville, Florida, is designing drones to paint multi-storey buildings and industrial structures - a job that now requires workers to be elevated with bucket lifts or scaffolding.

"Nobody wants to be at the top of a 200-foot man-lift in 98-degree southern heat painting an industrial structure," said company co-founder Jeff McCutcheon.

Replacing humans can get complicated: the drones must be tethered to a paint source on the ground, batteries must be periodically recharged and windy conditions can blow paint off target.

But Mr McCutcheon predicts within five years drones will allow a two-man ground-based crew to paint the exterior of a huge Walmart store in four hours instead of several days.

The number of commercial drones registered with America's Federal Aviation Administration (FAA) exploded in 2018 to 277,000, though that's still enough to do only a small fraction of dangerous jobs.

Regulations that restrict how far, how high and where drones can fly are expected to loosen in the next few years. The FAA estimates commercial drones could triple by 2023 - and possibly increase as much as fivefold.

Companies have every reason to accelerate drone use as quickly as they're allowed.

"Drones save us downtime, save cost, save on productivity for our maintenance personnel," said Mr Bardin, "and they eliminate having to put a person in that potentially hazardous environment."