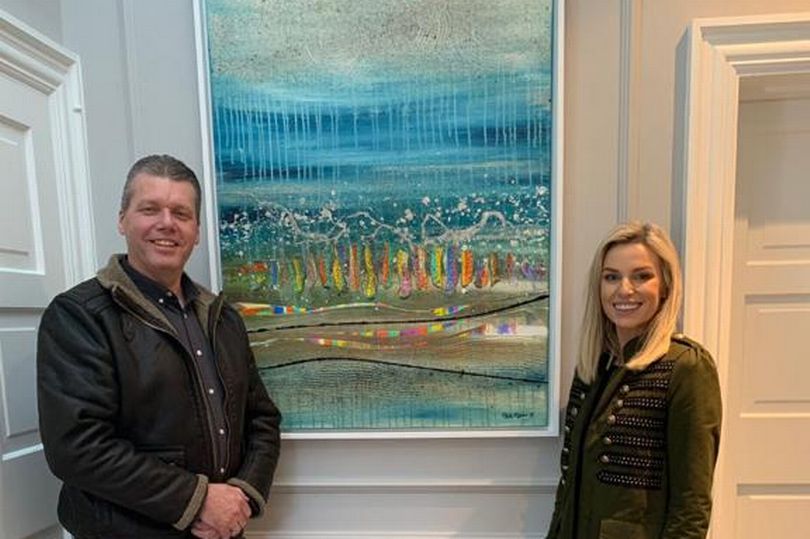 Dublin Businessman who lost everything in the Recession saved by Art

A Dublin artist told how losing two fortunes at the height of the boom left him paralysed on the floor with sciatica, a minor stroke and alopecia until art saved him.

Chris O’Hara, 49, made and lost it all by the age of 38 and painting has lifted him from a life of despair.

When the crash hit he let all his possessions fall by the wayside and in doing so discovered who he really was – a passionate artist.

Dubliner Chris told the Irish Mirror: “I suffered a minor stroke, got alopecia, lost half my hair through stress and worry and the final straw was sciatica, I got that about five years ago and it left me on the floor, I couldn’t move.”

“I call it my rebirth, I couldn’t sit, I was on the floor for nine months.

“Trying to create an empire and all the underworld stuff that goes on and then losing everything, it all came out in the wash.”

The dad of two owned 30 restaurants by his mid-30s including the popular Anglers Rest. The City Bank Hotel was his first franchise in 1993.

He said: “I always knew it never really filled the void, I set up the whole idea of franchising in Ireland before anyone had.

“I created Wacky Wing Sauces, 72 labels under my brand, I managed a rock band, the Slick Hippies, I set up a poker business and did lots of things that tried and failed. I even did catering for concerts.

“We moved to Canada for a while and I had my own TV show but nothing made me happy.

“I was obviously on the wrong journey, the body will always tell you if you aren’t on the right road.”

An artist trying to break free, Chris told how his late mother inspired him.

He said: “My mum was an artist, she was my best friend, my rock, as a child she was always working on art, she was big into display art.”

After his empire collapsed he started to go back to what he loved, art and met an old man in a park who inspired him.

He explained: “I was taking a walk in St Anne’s Park and I sat down beside a man on a bench, it was like something out of a movie.

“He said the best bit of advice I can give you is, until you strip yourself of everything you think reflects who you really are, you won’t really know who you are or what you really want.

“It could be the BMW, the big house etc, if you hold these things around you, it limits who you are.”

The businessman was on course to live a monk’s life, shedding himself of all possessions.

He explained: “I got a silver Hiace seven years ago and cheaply converted it inside and wanted to live the complete opposite way, depriving myself of everything.

“I went on a three-month roadtrip across Europe and then Africa, parking up at the side of the road, with €5 a day to spend on food.

“I travelled 75,000km and captured the essence of the trip and 500 photos were chosen.

“And the pictures went on a tour of all the shopping malls in Dublin.”

On this trip the artist finally broke free, adding : “What I thought was a geographical journey was a journey into the soul, the journey inside was 10 times tougher than the physical.”

Now an established artist with a waiting list of over 900, Chris has finally found his calling.

He said: “If you do what you’re passionate about, they’ll end up queuing up to pay for it.”

On a quest to find out what went wrong he studied psychology.

He added: “What happens to most of us we look for our happiness outside of ourselves, our partner, the new car, the new house. That’s trying to fill something that’s missing and then when that wears off after a day or two you’re frantically trying to fill that void again. If people just realise that all the happiness is inside you and you just have to let go and allow the process to begin.”

Opening up about his darker days, he added: “I suffered from depression myself but if I feel the dark cloud coming over me I get out and walk.

“Look at nature and stop worrying about what may never happen and pick yourself back up.

in me, I had to let the whole thing go.”

Art happens organically for Chris, it’s all about letting go. He explained: “I often paint throughout the night, being a trained chef I don’t use paint brushes, I use kitchen utensils.

“Suddenly you feel this leap to jump forward and just go with the flow and see what happens next.

“Six hours could pass and it’s like coming out of a trance and you’re not forcing it.

“I paint large paintings at a rapid rate and try to keep them affordable for the average person, so they range from €400 to €700.

“I wouldn’t have got this far without the average person supporting me.

“I provide a call-in service as much as possible, I’ll bring out 15 to 20 paintings to your home to see if they suit your house.”

Chris’s dream is to leave this world in a better place and create an art hub in Dublin City Centre in honour of his beloved mum.

He said: “We’re looking a hub, some of them in the city are up to 30,000 square feet where I’d house 30 different art studios, it’s going to be a free service where any artist can show their work.

“It would be affordable for upcoming artists, all in mum’s honour, she was an amazing artist and an incredible woman and I want to leave something in her honour.

“My empire was self-serving and for that reason it was very forced and it was never going to work.”

Celebrities are snapping up his art he adds: “I knew a few celebs in the business, Glenda Gilson bought one, Pippa and Brian Ormond O’Connor have five at the moment, Lucy Kennedy is getting one, Christy Moore bought one, Vogue and Spencer got one too.”

A very famous author is currently working on his life story and he hopes his story will inspire others to follow their passion, the man who was once lost has been found.