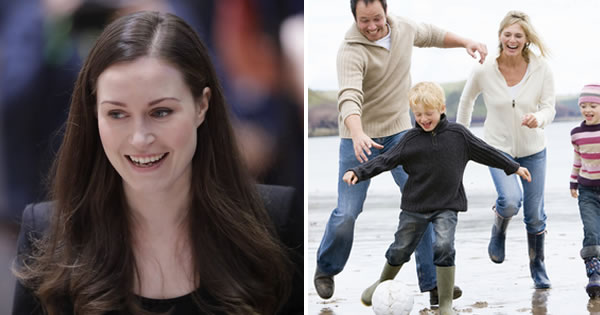 Finland is considering a four-day week. Is this the secret of happiness?

Reduced working hours, as suggested by the new Finnish PM, can boost productivity and cut carbon emissions. Here’s the evidence behind the idea.

Finland’s new prime minister, 34-year-old Sanna Marin, has floated the idea of a four-day week. It sounds quite glorious, doesn’t it? However, critics of reduced working hours, think the idea is bonkers.

Are they right? The evidence says not.

Reducing the length of the working week boosts productivity. When, in August, Microsoft Japan tested a four-day week, productivity work shot up by about 40%. One Melbourne organisation found a six-hour working day forced employees to eliminate unproductive activities such as sending pointless emails, sitting in lengthy meetings and cyberloafing (messing around on the internet). British businesses that have successfully switched to a four-day week include Elektra Lighting, Think Productive and Portcullis Legals.

A survey by the TUC found 45% of employees want a four-day week. According to a study by Henley Business School, 77% of workers said a four-day week improved their quality of life. When the city of Gothenberg in Sweden introduced a six-hour day for some nurses, the nurses became healthier, happier and more energetic.

Reducing working hours is also good for the natural environment. According to some analyses, a shorter working week could also lead to a significant cut in our carbon footprint as employees produce less carbon emissions getting to work, use fewer resources at work and have more time to cook and shop instead of relying on takeaway food delivered in plastic containers.

Although a shorter working week has many benefits, it is not a magic solution. The Wellcome Trust backtracked on plans for a four-day week, saying it would be “too operationally complex”. Gothenberg dropped its six-hour-day experiment because of increased costs. Bosses worry a shorter working week will create staffing challenges and make it harder to serve customers, while employees worry that working less will make them look lazy. These challenges are not insurmountable. Indeed, reduced working days are nothing new.

Since the industrial revolution, the number of hours worked has been falling. When working hours in Britain were cut from about 54 hours a week to 48 hours a week in 1919, it had no effect on productivity and competitiveness. Kellogg’s, the US cereal manufacturer, successfully operated a six-hour working-day policy for many years in the middle of the 20th century. It was only dropped because management wanted the firm to have work practices like other companies. It is entirely possible to be happier and more productive and environmentally friendly at work. It might sound too good to be true, but it could be the norm in a few years.