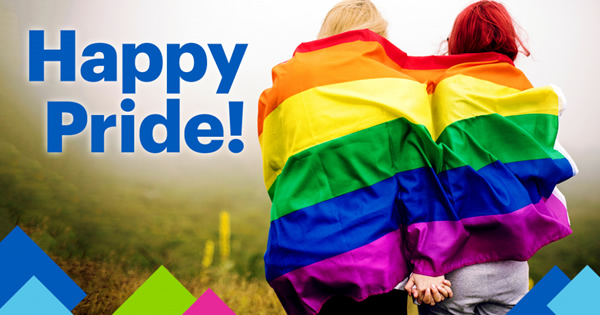 Happy Pride! 12 Companies That Support LGBTQ Families All Year Round

June is here, and with Pride Month comes all the fanfare surrounding the LGBTQ community that our underrepresented brothers and sisters deserve. What happens the other 11 months of the year, and which of the companies flaunting Pride Month ties truly put their money where their mouths are, though? These 12 companies support LGBTQ families year round, so they're a good place to start if you're a job-seeker or a supporter of this underrepresented community looking to show some social awareness with your hard earned cash.

Aside from that, on this issue, it can be very difficult to keep track of the players without a scorecard. Thankfully, a little research can easily rectify that problem. The Human Rights Campaign (HRC) releases an annual survey called the Corporate Equality Index that focuses on corporate policies and practices around the LGBTQ community including health care; corporate non-discrimination relating to gender, sexuality, and gender identity; supportive inclusion guidelines for transgender workers who are transitioning; a public commitment to LGBTQ equality; and traditional benefits including paid family leave extending to LGBTQ families. In the 2019 survey, released in March, 571 corporations and law firms earned 100 perfect scores.

These 12 companies are not only among the HRC's 100 percent club, but they also make the top of the list on many other reviews.

"LGBTI inclusion is not only the right thing to do from an interpersonal point of view, it is also a business imperative because CEOs recognize that a culture of equality creates trust, innovation and therefore business growth." So says Sander Van 'T Noordende, Group Chief Executive Products, regarding this Irish company's commitment to the LGBTQ community. With its U.S. headquarters in New York City, Accenture has won awards for its LGBT Allies program, which pairs queer employees with mentors to help them negotiate the company's programs and support. Job search site FlexJobs reports that the company's specific focus on professional development and advancement among the LGBTQ community has helped users reach executive ranks at a more rapid rate.

With CEO Tim Cook — the first openly gay chief executive of a Fortune 500 company — at the helm, it's perhaps not surprising that Apple regularly hits the top of lists for LGBTQ-friendly places to work. Headquartered in Cupertino, California, the tech brand has earned a perfect score from the HRC for 15 years and first offered health care benefits for same-sex domestic partners more than 20 years ago, as The HR Digest reports. Among the additional benefits with special meaning for families, same-sex partners of employees receive six weeks of leave after the birth of a child.

Communications conglomerate AT&T began prohibiting discrimination against LGBTQ employees in its ranks way back in 1975 according to company records, and it has been ahead of the curve ever since. The company was one of the first in the nation to offer LGBT domestic partner benefits beginning in 1998, and now has the requisite full suite of benefits as with the other corporations on the HRC list. AT&T also has an innovative supplier diversity program that enables selection of LGBTQ suppliers, which resulted in $14.2 billion in spending in that category in 2016 — a rising tide floats all the boats.

Delta's LGBTQ community boasts about the strength it brings to its employee resource group, the Delta Employee Equality Network (DEEN), and the influence it has had on the company's policies including health benefits for same-sex couples. In the past several years, the company has won several awards for its treatment of its LGBTQ employees, including the AIM100 award from Affinity Magazine. Delta is also the official airline and sponsor of GLAAD, as well as seven events across the U.S. this Pride season.

The tech giant celebrated Pride 2018 with their hashtag #ThisIsFamily that showcased their LGBTQ employees and their families and encouraged donations to GLAAD and PFLAG. This year, their site Pride.Google features a short film called Stonewall Forever and a rundown on the State of Pride. Also this year: Google is getting a lot of flak for failing to kick hatemongers, like those who foment bullying and assaults against the LGBTQ community, off of YouTube. However, like AT&T, Google carries extra street cred as a founding member of a prestigious global coalition of companies showcased byFastCompany in 2015 when they convened with the mission of advancing LGBTQ equality in the workplace.

This Chicago-based hotelier is also a global employer and was named to the 2018 FORTUNE World’s Best Workplaces list, their fourth straight appearance on that roster — thanks to benefits which of course extend to their LGBTQ staff. For those who like to travel, Hyatt's perks extend to complimentary and discounted stays at properties in 56 countries worldwide, while they also include paid time off following the birth or adoption of a child, and even extend to financial assistance for adoption.

A long list of banks made the HRC list. This one earned a perfect score for its LGBTQ policies both this year and last year and is also ranked number 20 on the FORTUNE 500. The company actually pioneered an effort with the HRC in 2014 to study LGBTQ-led families, forming a working group within the company specifically to support this constituency. Additionally, it prioritizes LGBTQ representation in senior management and supplier diversity — the latter detailed by Business Equality Pride magazine — and reinforces its commitment to the community by sponsoring an impressive array of Pride-related events in communities nationwide.

This health and personal care products company goes above and beyond for all employees starting a family: Headquartered in New Brunswick, New Jersey, the company offers assistance with fertility treatments, surrogacy, and adoption, followed up by a generous helping of parental leave. The company operates six child development centers on its campuses worldwide as well as providing a discount through KinderCare, a national childcare provider here in the U.S. The cherry on the sundae is their Care with Pride initiative that helps support and "openly champion love, equality and care for all people within the LGBTQ community," according to the program's website.

It's worth writing about streaming service Netflix for their parental leave policies alone: Salaried and hourly employees who've adopted or given birth to a baby can take up to a year off at full pay, and naturally that applies equally to same-sex families. Like many tech companies, Netflix has provided same-sex employee partners access to the same benefits as other domestic partners for nearly 20 years, says Mashable.

Marc Benioff, Salesforce's CEO, was honored by GLAAD in 2016 for his public and outspoken fight against anti-LGBTQ laws, as reported by Medium. Benioff's passion extends throughout the company he leads, putting the company's resources at the service of getting states and municipalities to roll back legislation involving issues like sales of wedding cakes to gay couples and the use of preferred bathrooms by transgender individuals. As such, while the company, headquartered in San Francisco, has all the benefits that the HRC survey measures — they've earned their perfect score, just like all the others on this list — their agenda also includes a unique focus on impacting the standard of living for LGBTQ families beyond their employees.

With more than 1,800 stores across every state in the U.S., Minneapolis, MN-based Target has the opportunity to impact a lot of LGBTQ families. Although there's been an on-again, off-again bumpy relationship between the retail giant and the LGBTQ community — this story from CBS gives a brief rundown of the history between the two sides — it has since cleaned up its stance in this area to earn its perfect score. Its embrace of LGBTQ society includes mirroring families in its advertising — for example, for its popular wedding registry.

Despite having attracted some bad press lately for its treatment of drivers in the field, Uber puts the "ride" in Pride when it comes to its corporate employees by helping others outside the company's ranks get in on the equality: Like Salesforce, it has institutionalized the promotion of LGBTQ causes in the communities it serves. The San Francisco-based organization shares something in common with other tech behemoths included in the HRC list in that it offers a generous leave policy for new parents: As Vox reports, it's 17 weeks for the primary caregiver, and six weeks for the secondary caregiver.