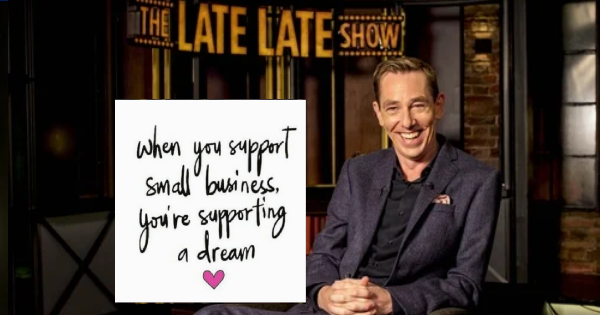 Showcase your Small Business on the Late Late Show!

The Late Late is going showcase the best of small Irish businesses in a special programme on Friday, November 6 on RTÉ One.

The move follows a callout by Ryan Tubridy on his RTÉ Radio 1 show this week for entrepreneurs to send him in details of their businesses so that he could encourage people to shop local in the run-up to Christmas.

Speaking on his show on RTÉ Radio 1 on Wednesday, the host said: "We are going to do something very big on this on The Late Late Show. We've decided that this is a strain that's running through the country that needs to be acknowledged with as big an audience as possible.

"The Late Late Show has never been as popular, thankfully, viewer-wise - even more so than last year, which is just amazing. Well over half a million people will watch this programme, on average, to look at you. So it's alive and well and very healthy, and we appreciate all the viewers coming to see us on a Friday night. I have to say that, and I don't say that enough."

"The good news is that on Friday, sixth of November we are going to go big on local business to say, 'We hear you, we want you, we want to support you and we want to send all that business your way'. Shop local, buy local, keep local alive."