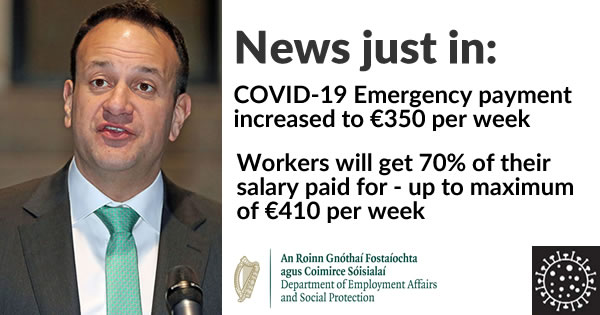 The Government’s Covid-19 emergency support payment for people who have lost their job as a result of the pandemic will increase from €203 to €350, it was confirmed on Tuesday.

It is understood that a Cabinet meeting approved the move this morning.

Ministers also gave the go-ahead for a scheme which will see the Government pay 70 per cent of a workers’ salary - up to maximum of €410 per week - where the company agrees to continue paying the remainder of the salary. This is based on an average salary level of €38,000.

The scheme will apply to companies hit by the virtual shutdown in economic activity across large parts of the economy because of the virus outbreak.

Employers looking to participate in the income support scheme would have to prove a decrease in income of 25 per cent and that they have liquidity difficulties. It is estimated that this support scheme could cost up to €4 billion.

This second element is similar to schemes announced recently by the Danish and UK governments.

The measures are designed to try and offset the economic impact of the pandemic which has seen more than 140,000 people in the State lose their jobs.