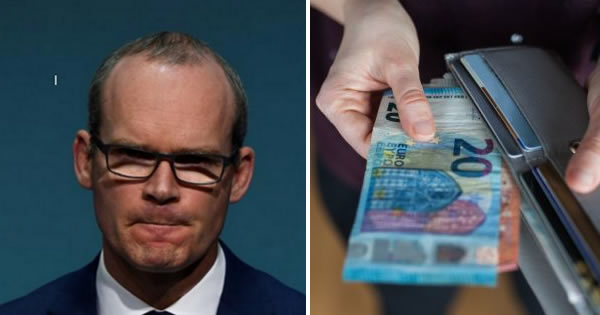 The Irish Government will introduce a significant financial package next week for those who have lost their jobs due to coronavirus-related disruption and others at risk of becoming unemployed, Deputy Prime Minister Simon Coveney said on (today) Sunday 22nd March.

Other European countries like Britain and Denmark have moved to pay up to 80% of the wages of staff who have either lost or are at risk of losing income as a result of the pandemic".

"I want to reassure people that the government are going to introduce a significant and supportive economic package in the coming days that will go well beyond what we have announced to date," Coveney told national broadcaster RTE. "That will treat everybody equally, so in other words we are not going to separate the people who have lost their jobs to date from the people who may lose their jobs next week.

We want to do something that provides, if you like, a guaranteed level of income for everybody across the country."

Ireland has so far introduced an emergency 203 euros a week payment for employees and self-employed people who have lost their jobs or had hours cut and the government has said it will refund the same amount to struggling firms who keep staff on. It said 58,000 people had already claimed the payment by Wednesday, just three days after its introduction following the closure of schools, childcare facilities and pubs.

A huge number of restaurants and retailers followed suit voluntarily.Ireland is planning to ramp up coronavirus testing to cut a waiting list that stands at 40,000, over three times the number tested this week alone, Health Service Executive (HSE) operations chief Anne O'Connor told a news conference.

With 41 test centres due to be in operation from Tuesday, including a naval ship anchored in Dublin's River Liffey, the HSE plans to conduct 4,500 tests a day from Monday. It is distributing 40,000 test kits around the country and is close to finalising an order from China for 100,000 more.HSE chief executive Paul Reid added that the 50,000 people from all manner of professions who answered a recruitment call issued last week included 5,000 nurses and 1,000 doctors.

"This week is a huge week in the history of the healthcare system in Ireland," Reid said. "We can save lives by our actions this week.

COVID-19: Get all of the latest updates for Employees and Employers here.