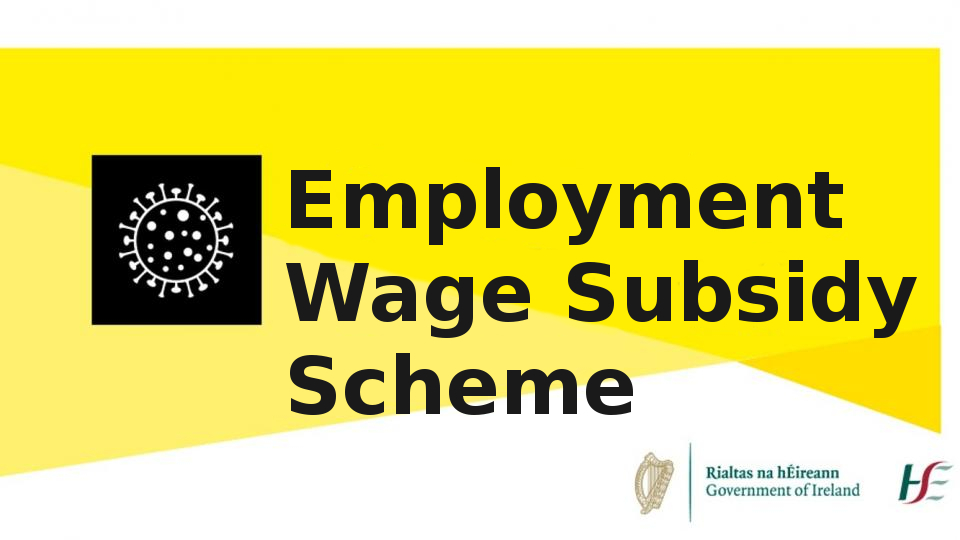 The Employment Wage Subsidy Scheme has been extended until the 31st December 2021 with further supports and a new scheme announced for struggling businesses.

The new Business Resumption Support Scheme will provide additional business support for businesses with reduced turnover. Further details will be implemented in September 2021

Read the full Press Release below;

From Department of Finance

Following the Government meeting today (Tuesday), the Minister for Finance, Paschal Donohoe, T.D., has announced the following set of measures to provide support to businesses as they re-open and resume normal trading:

• The extension of the Employment Wage Subsidy Scheme to 31 December 2021;

• The extension and enhancement of the Covid Restrictions Support Scheme to provide additional support to businesses upon re-opening and to give certainty to businesses still directly affected by public health restrictions;

• A new additional business support scheme (Business Resumption Support Scheme or BRSS) for businesses with reduced turnover as a result of public health restrictions to be implemented in September 2021;

• The extension of the tax debt warehousing scheme to allow the period where liabilities arising can be “warehoused” to be extended to the end of 2021 for all eligible taxpayers, with an interest-free period during 2022, and to include overpayments of EWSS in the scheme;

• The Government agreed to the drafting of legislation to provide for these measures.

These measures will provide certainty to businesses as public health restrictions are lifted and allow them to plan for the future as they re-open and resume normal trading.

The EWSS continues to represent a substantial and key part of the Government response to the Covid-19 pandemic, supporting businesses, encouraging employment, and helping to maintain the link between employers and employees.

For Q3, the Government has decided to broadly maintain the status quo for EWSS, including the enhanced rates of support and the reduced rate of Employers’ PRSI with a modification to widen eligibility.

For Q4, the Government has approved the extension of the EWSS, however, it is considered too early yet to prescribe the precise operational parameters of the scheme that should apply for that quarter, and decisions in that regard would be taken closer to the time around the end of August / early September.

The Covid Restriction Support Scheme (CRSS) has been an extremely successful intervention by the Government to provide support to businesses whose customers are prevented from accessing their premises because of Public Health restrictions.

The CRSS in its current form will be continued to the end of 2021 for the reducing number of businesses that are still directly affected by public health restrictions that may remain in place. The qualification criteria and payment rates will remain unchanged.

The Government will also provide for an enhanced restart week payment – a single payment of three double weeks to businesses upon re-opening (subject to a maximum of €30,000). This will provide additional support to the businesses in restocking and making the necessary preparations to welcome their customers back in a safe manner.

This enhanced restart payment is intended to incentivise them to exit the scheme and return to trading as early as possible.

As the economy re-opens, a further scheme is being introduced for vulnerable but viable businesses, particularly in sectors that were significantly impacted throughout the pandemic, even during periods when restrictions were eased.

Businesses whose turnover is reduced by 75% in the reference period (1 September 2020 to 31 August 2021) compared with 2019 will be eligible. The scheme will not be restricted by location, rate-paying, or physical premises. It is expected that there will be a limited number of such businesses and recognised that it is important that such businesses are supported.

Businesses who previously availed of other schemes such as SBASC and the Tourism Business Continuity Scheme for example as well as CRSS will be eligible to apply provided they meet the qualifying criteria.

The BRSS will be administered by Revenue and will operate in a similar way to CRSS.

The tax debt warehousing scheme has provided approximately €2.3 billion of liquidity to Irish businesses at a time that they need it most. The scheme is now being extended to the end of this year, with no interest during 2022 and interest at a reduced rate of 3% thereafter.

Speaking on the overall package of measures, the Minister said

“The Government and I have committed on multiple occasions that there will be no “cliff-edge” to supports for business. We are now taking decisive actions to provide businesses with clarity and certainty on their situation as they reopen, as far as it is possible to do so with the uncertain situation in relation to public health.”